TOKYO — Analysts are predicting “Dr. Copper” will go on a sustained rally as the China-led global economy shows signs of climbing out of the coronavirus slump, though some long-term investors are adamant about staying away.

The benchmark copper price on the London Metal Exchange in early May hit a record high, at $10,460 a ton, and has since remained above $10,000. Its price had not been near that threshold for a decade; to reach it, it almost doubled in a year.

Market analysts are not surprised.

The leap “was expected,” said Takayuki Honma, chief economist at Sumitomo Corporation Global Research. “Sooner or later the price would have gone above $10,000.”

The impact of the pandemic has done little to soften demand, mainly due to China’s speedy recovery.

China is the world’s biggest copper buyer, consuming half of all global output. The country’s imports of unwrought copper and products rose 9.8% during the January-April period compared to a year earlier.

“There is almost no reason for copper prices to go down,” said Tetsu Emori, the CEO of Japanese investment advisory Emori Fund Management. Emori noted that copper is turning into an attractive commodity for investors, especially as major countries push for decarbonization, which is expected to boost demand for electric vehicles as well as wind and solar power generation stations.

Copper is mainly used to make electric cables and is indispensable to infrastructure builders. It earned its “Dr.” honorific with its uncanny ability to predict the health of the world economy.

China’s recovery has triggered a price jump for many commodities despite the pandemic. In just one year, iron ore prices jumped 78% and the benchmark price of lumber tripled. The price of other metals such as nickel and aluminum have also risen. 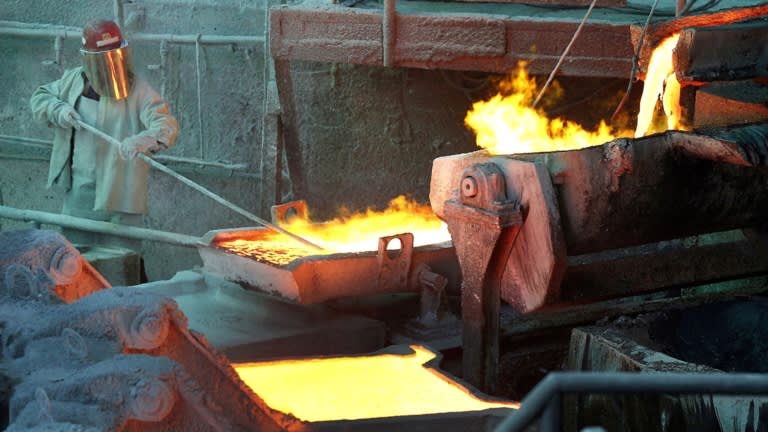 As their costs climb, mining companies remain cautious about doubling down on new developments.

Many analysts say copper is unlikely to fall well below $8,000 a ton.

His bullish view is not groundless.

Goldman Sachs estimates that copper demand will grow nearly 600%, to 5.4 million tons, by 2030 due to the green transition. However, the market could face an 8.2 million ton supply gap by 2030.

New mine development has been limited for the past decade, and mining companies remain cautious about doubling down on new developments amid rising costs.

Promising mines are located in places where it is difficult to deliver large equipment. A rise in environmental awareness is also causing an increase in environmental mitigation costs. Even if companies start exploring mines now, it would take at least five years for one to yield anything. Across Asia, meanwhile, shares in mining and trading companies have soared on rising demand for copper.

The stock of Japanese trading house Marubeni Corp. has surged over 34% since the beginning of the year, while nonferrous-metal producers like Dowa Holdings and Eneos Holdings have posted strong year-to-date gains.

Similar trends can be seen in other parts of the region. In South Korea, shares in copper manufacturer Poongsan Corp. have jumped more than 46% this year, while those of Korea Zinc are riding 16% gains. Chinese copper miner Jiangxi Copper’s stock price has risen 47% in Hong Kong, while Zijin Mining Group’s price has soared 31%.

Money has flowed into shares of related companies as hopes for an extended copper rally give investors an appetite for risk. It is also a part of a trend in which investors are rotating out of highflying growth stocks and into cyclical stocks in anticipation of economies recovering from their COVID swoons.

As a result, the mining sector has outpaced tech stocks in recent months.

Shares in big tech names like Apple and Alibaba Group Holding remain in negative territory compared to the start of the year and those of Japan’s SoftBank Group and Taiwan Semiconductor Manufacturing Company only show modest gains. 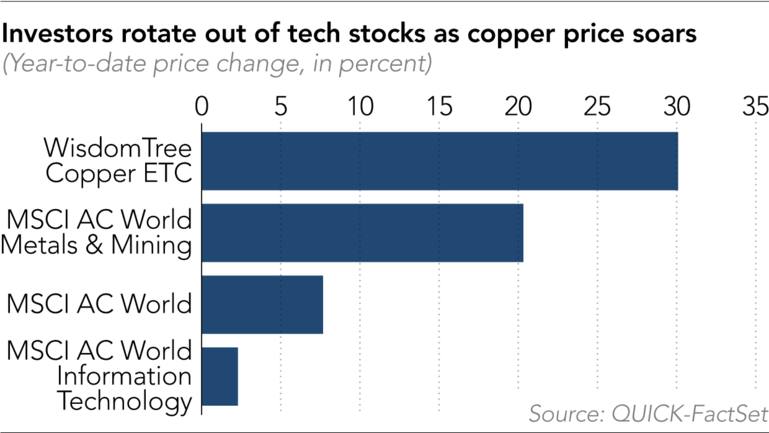 The MSCI ACWI metals and mining index, composed of large and mid-cap stocks across 23 developed and 27 emerging markets, has advanced 20% this year, well above the 4% gain recorded by the MSCI ACWI information technology index.

The WisdomTree Copper ETC has recorded about an 80% return in the past year, with assets under management at one point growing to a record of more than $900 million. The United States Copper index fund, with more than $300 million in AUM, has also logged a one-year return of over 80%. Electric vehicles need plenty of copper wiring to propel themselves.

Japan’s trading houses last year attracted global attention when it was revealed Warren Buffett’s Berkshire Hathaway had purchased a little over 5% of the shares of Marubeni, Sumitomo Corp. and three other big traders.

Buffett, known as a value investor who holds stocks for long periods, said in a statement that the trading companies “have many joint ventures throughout the world and are likely to have more. … I hope that in the future there may be opportunities of mutual benefit.”

Trading houses are deeply involved in the real economy. They supply energy, metals, commodities and a range of other products in resource-poor Japan.

Meanwhile, some long-term investors are cautious about putting their money in a sector that depends heavily on economic conditions and market cycles.

Masafumi Oshiden, head of Japan Equity at BNY Mellon Investment Management in Tokyo, said, “It is still difficult to make a positive assessment based on ESG [environmental, social and governance] criteria.”

Companies are under growing pressure from activists and investors to act to tackle climate change, while governments around the world have started to announce their commitments to decarbonization. Mining companies have been urged to shift towards cleaner production processes and commit to greater transparency in order to align with ESG values.

Oshiden, whose investments focus on the prospects of enhancing long-term corporate value, points out that mining companies do not fit this strategy yet. “Earnings are also hard to predict for trading houses,” he said, “which operate in multiple fields of business.”