To stop the Iranian regime terrorism dead in its tracks, Tehran’s embassies and its web of financial networks must be closed down and its agents and lobbyists expelled from the United States and Europe, prominent speakers at a major global summit told tens of thousands of Iranians and international supporters who joined online on Monday (20 July).

On the third day of the groundbreaking virtual Free Iran Global Summit: Iran Rising Up for Freedom, (#FreeIran2020) which linked people from at least 30,000 locations in 102 countries, with 1,000 international politicians and lawmakers, participants urged the world to take a more decisive stance to confront the world’s central banker of terrorism.

They said the regime’s embassies and front organizations serve as its branches or platforms for launching terrorist operations around the globe.

Dozens of lawmakers from around the world also participated, including many US senators and House members.

Speakers highlighted the regime’s terrorist plot against a 2018 rally in support of the largest Iranian opposition, the People’s Mojahedin Organization of Iran (PMOI/MEK) and the coalition of democratic opposition, National Council of Resistance of Iran (NCRI) in Paris, which was foiled by European authorities at the last minute.

As evidence of how Tehran’s embassies are complicit in terrorism, a sitting diplomat of the regime working at its embassy in Vienna, Austria, was directly involved in that 2018 plot. He is now facing trial in Belgium for personally handing explosives to his accomplices.

“This so-called diplomat will be held accountable for the malicious crime he was planning to commit at the order of his boss, Javad Zarif, as well as Khamenei himself,” said British parliamentarian Bob Blackman. 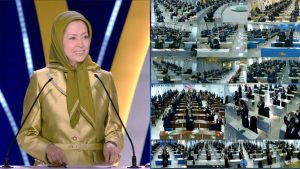 The event’s keynote speaker, NCRI President-elect Maryam Rajavi, (pictured) told the throng of supporters online that the regime hides its weaknesses by resorting to terrorism. The world needs to act decisively against the regime because appeasement would embolden it, she added.

“Terrorism is the essence and fundamental nature of this regime and it is inseparable from it.”

Rajavi continued: “The regime’s terrorism grows and expands under the shadow of silence, denial, ignorance. … It is time for all this ignorance about the people of the world’s fate, security and peace to end.”

As concrete steps, she urged the closing of the regime’s embassies, front companies and religious centers, as well as the expulsion of its operatives and lobbyists from western territories.

The message was echoed by other speakers, including former Undersecretary John Rood, who said, “Countries must very closely monitor and surveil the activities of Iranian diplomats, and when necessary shut down the regime’s embassies.”

Governor Tom Ridge said: “The mullahs and Rouhani oversee the central bank of terrorism. And what we discovered over the past several years is that the embassies in many of the countries have become bank branches.”

Ambassador Joseph pointed out: “This seemingly never ending fantasy that the regime will at some point conform to international norms and practices is just that, it is a fantasy that only encourages the regime to commit more crimes.”

“This regime,” said Gen. Casey, “will remain a destabilizing force as long as it remains in power. Change must come to Iran.”

Mayor Giuliani called on the West to support a democratic Iran and said, “Today, the people in the streets of Iran are calling for the overthrow of [the regime], and they are holding up pictures of Madam Rajavi and the MEK”.

“The MEK,” Ambassador Adam Ereli explained, “has been exposing this conspiracy of terror by the government of Tehran over many years,” and that is why the regime has tried to “demonize you outside of Iran.”

Senator Ben Cardin, Democrat from Maryland, said: “You’re continuing to wage a heroic uprising against the corruption and brutality of the regime.”

“A brighter future is within reach in Iran.”