The Nikkei Asian Review is tracking the spread of the new coronavirus that originated in the central Chinese city of Wuhan.

Global cases have reached 153,517, according to the latest situation report issued by World Health Organization on Sunday. That was an increase of 10,982 from the previous day’s report.

To see how the disease has spread, click this interactive virus tracker:

The government has also agreed to pay 600 Ringgit monthly for a period of six months for those affected by retrenchment or forced unpaid leave. This initiative is expected to cost the government 120 million Ringgit and benefit some 33,000 Malaysian employees.

6:44 p.m. All visitors arriving in Macau, except those from Greater China including Hong Kong and Taiwan, will be subjected to 14 days of quarantine starting Tuesday.

5:10 p.m. European stock markets tumbled to start the day despite dramatic monetary easing steps taken by a host of central banks around the world. The FTSE 100 opened 4.7% lower, meaning the London blue-chip index is down more than 30% for the year. Germany’s Dax and France’s Cac 40 opened more than 4.6% lower.

4:50 p.m. The Bank of Korea cut the benchmark rate by 50 basis points to a record low of 0.75% in a bid to support the country’s plunging stock market.

3:00 p.m. Tokyo stocks took a downturn as investors appeared unimpressed by the Bank of Japan’s decision to expand its purchases of stocks, bonds and other financial assets. The benchmark Nikkei stock index ended the session at 17,002, down 2.46%, or 429 points from the previous day’s close.

2:12 p.m. The Bank of Japan expanded its monetary stimulus at a hastily called one-day policy meeting on Monday, joining other central banks rushing to support a global economy hit by the spreading coronavirus.

12:30 p.m. New York City and Los Angeles said they will impose restrictions on eating and drinking establishments and close theaters and cinemas to slow the spread of the coronavirus. Restaurants, bars and cafes will only be able to sell food via takeout and delivery. The move came after New York City’s public schools were told to close until at least April 20.

12:05 p.m. The number of visitors to Hong Kong fell more than 96% in February to 199,000, with a further drop expected in March, the Hong Kong Tourism Board has said. The board added it is working on a HK$400 million ($51 million) trade support plan to aid the city’s battered tourism industry.

11:00 a.m. China’s industrial output fell by 13.5% for the combined months of January and February from the same period a year earlier — marking the sharpest drop in 30 years — as the spread of the coronavirus disrupted supply chains and cooled demand.

10:42 a.m. The Philippine Stock Exchange opened 5.6% lower on Monday, the first business day of a 30-day lockdown of Metropolitan Manila to fight the spread of the new coronavirus. Employees work on a car seat assembly line in Shanghai, China, in February. China’s industrial output for the combined months of January and February shrank 13.5% from the same period last year, disrupted by the coronavirus.

10:34 a.m. The U.S. Centers for Disease Control recommended that events of 50 or more people over the next eight weeks be canceled or postponed for two months. The CDC’s concerns included concerts, sporting events and weddings.

9:45 a.m. Mainland China had 16 new confirmed cases of coronavirus infections on Sunday, bringing the total number of cases to 80,860. The death toll in the mainland had reached 3,213, up by 14 from the previous day.

9:00 a.m. New Zealand’s central bank cut interest rates by 75 basis points to a record low after an emergency meeting. The move, aimed at cushioning the impact of the pandemic, follows rate cuts by central banks around the world, including the U.S. Federal Reserve.

8:57 a.m. The Bank of Japan said it will hold an emergency policy meeting at noon on Monday to discuss monetary policy in light of recent economic and financial developments. The meeting will replace the scheduled rate review on March 18-19.

6:07 a.m. The U.S. Federal Reserve said it cut rates back to near zero, restarted bond buying and joined with other central banks to ensure liquidity in dollar lending to help put a floor under a rapidly disintegrating global economy amid the worsening coronavirus pandemic. The Fed’s target range is now 0% to 0.25%, and it will buy at least $700 billion in Treasuries and mortgage-backed securities in coming weeks.

9:30 p.m. Malaysia reported 190 new infection cases on Sunday, with most linked to a religious event at a mosque that was attended by 16,000 people from several countries. The 80% jump in cases from a day earlier brings the total number of infections to 428 — the worst affected country in Southeast Asia.

8:34 p.m. The Beijing Municipality Government stepped up coronavirus preventive measures, requiring all visitors from abroad to be quarantined in centralized observation centers for 14 days, effective March 16. Individuals will be for the cost of their quarantine.

7:03 p.m. Singapore said all travelers entering the city-state who recently visited ASEAN countries, Japan, the U.K. and Switzerland will be required to stay home or at a hotel for 14 days, starting from Monday at 11:59 p.m.

4:26 p.m. Indonesian President Joko Widodo called on people to start “working from home, studying at home and praying at home,” adding that cabinet members had undergone coronavirus testing on Sunday morning, after the for the virus. The country added 21 new positive cases, bringing the total confirmed to 117, including five deaths.

12:56 p.m. Australia will impose a 14-day self quarantine on all international arrivals from midnight Sunday in an attempt to contain the spread of coronavirus, Prime Minister Scott Morrison said.

8:45 a.m. U.S. President Donald Trump tested negative for the coronavirus, his doctor said, as the president extended a travel ban to Britain and Ireland to contain the spread of the virus.

5:00 a.m. Thousands of Philippine police started sealing the densely populated capital from most domestic travelers on Sunday as Manila, home to more than 12 million people, went under a lockdown to block the coronavirus spread. 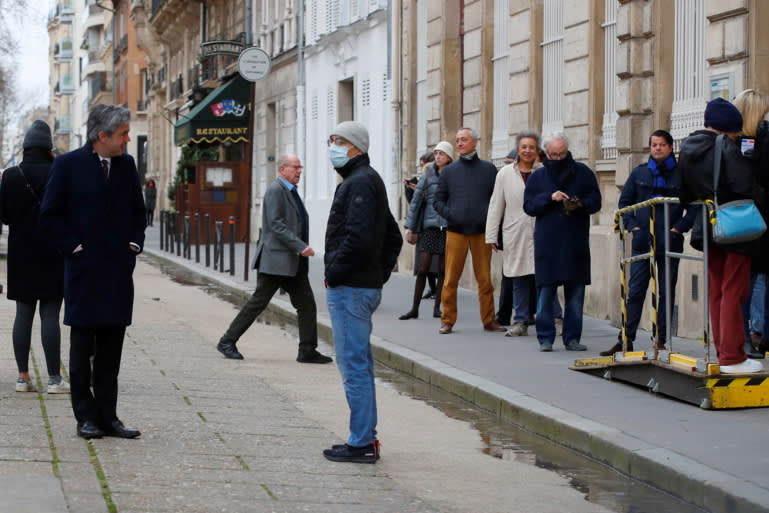 A man, wearing a protective mask, waits outside of a polling station before voting during the first round of mayoral elections in Paris as France grapples with an outbreak of coronavirus disease.

3:56 a.m. France will shut shops, restaurants and entertainment facilities from Sunday, with its 67 million people told to stay home to help combat the spread of the coronavirus. The country’s health authority said 91 people had died and almost 4,500 were now infected nationwide.

11:15 p.m. Indonesia’s Transport Minister Budi Karya Sumadi has been hospitalized and isolated in Jakarta after he contracted the new coronavirus, a senior government official told a news conference on Saturday.

8:15 p.m. Japanese Prime Minister Shinzo Abe said the government will inject “necessary and sufficient” funds into the economy and use “unprecedented ideas” to bring back growth. The prime minister, however, stopped short of declaring a state of emergency, which he was empowered to do earlier this week under a new law.

4:30 p.m. Apple said late on Friday it will close all its retail stores outside greater China until March 27, to minimize risk of coronavirus transmission. Airport officers stand at the entrance gate of international departures terminal of Soekarno-Hatta Airport near Jakarta amid the coronavirus disease outbreak.

3:46 p.m. Indonesia’s capital city, Jakarta, will close all schools and has ordered remote teaching for at least two weeks starting next week to slowdown the spread of the coronavirus, Jakarta Governor Anies Baswedan told a news conference.