Worshippers were back at the Vatican today while restaurants are open for business again in Spain and Italy as Europe continues to ease its lockdown measures.

Cafes were serving customers at outdoor tables in Rome this morning while shops, bars and hair salons can all re-open as Italy tries to revive its economy.

Bars and restaurants can also re-open in Spain where gatherings of 10 people are now permitted – but the easing of restrictions does not include Madrid or Barcelona.

Similar steps are being taken in Portugal, where the country’s prime minister was among those to enjoy an outdoor breakfast at a re-opened cafe in Lisbon this morning.

Visitors were also back at some of Europe’s most famous landmarks as worshippers queued to enter St Peter’s Basilica for the first time since March 9 and Greece re-opened the Acropolis in Athens.

Meanwhile, Ireland is also taking its first steps out of lockdown today as some shops and sports facilities were allowed to open their doors.

VATICAN CITY: People queue up at a safety distance as they wait to enter St Peter’s Basilica in the Vatican today, more than two months after it closed because of coronavirus 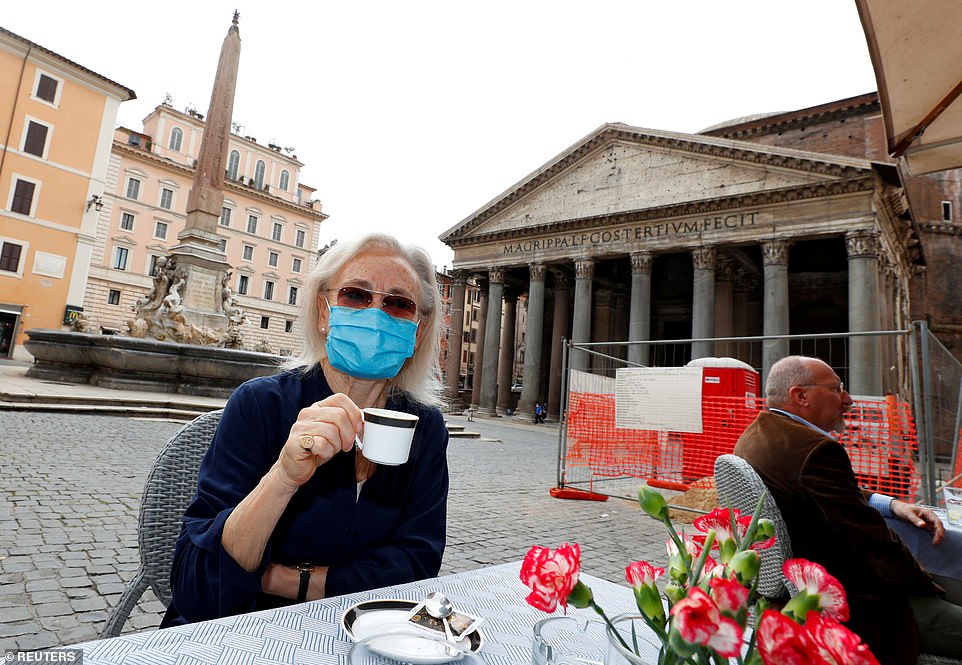 ITALY: A woman wearing a mask sits at an outdoor table in Rome this morning as Italy allows shops and restaurants to re-open from today 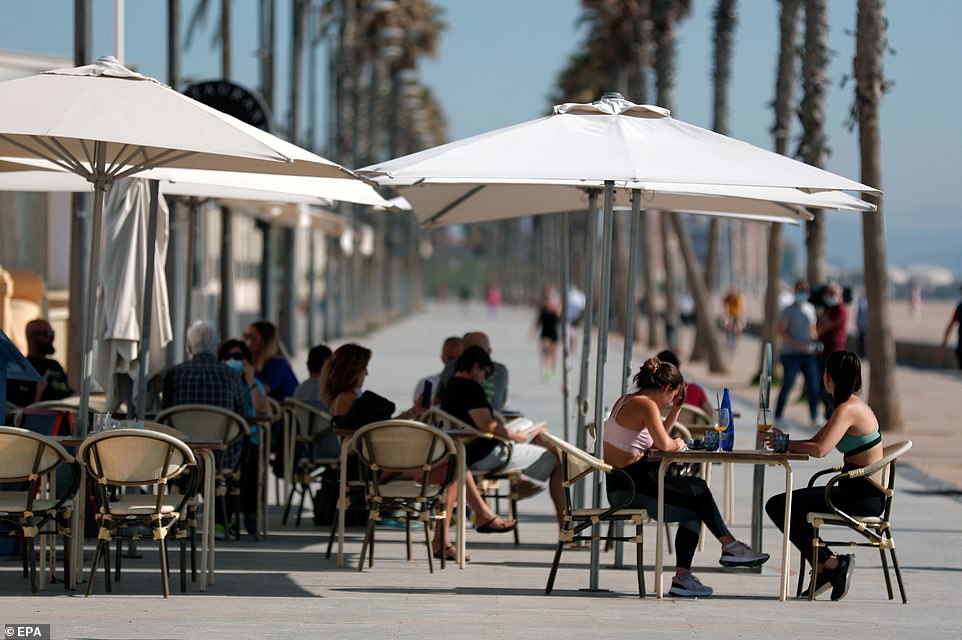 SPAIN: Customers sit at outdoor tables at La Malvarrosa beach in Valencia today, as cafes and restaurants re-open in much of Spain 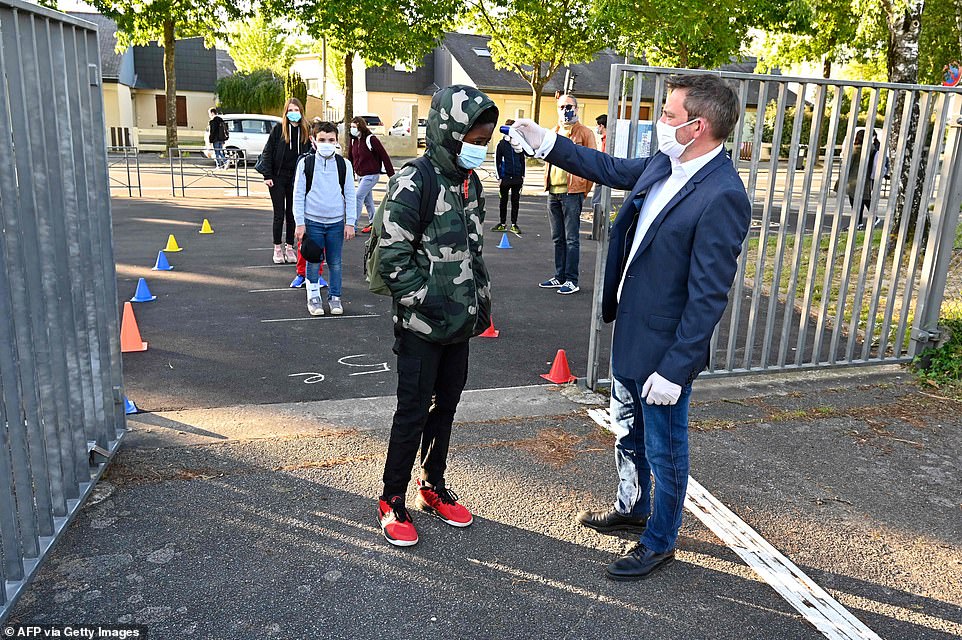 FRANCE: A schoolboy wearing a mask has his temperature checked before entering the Claude Debussy school in Angers this morning 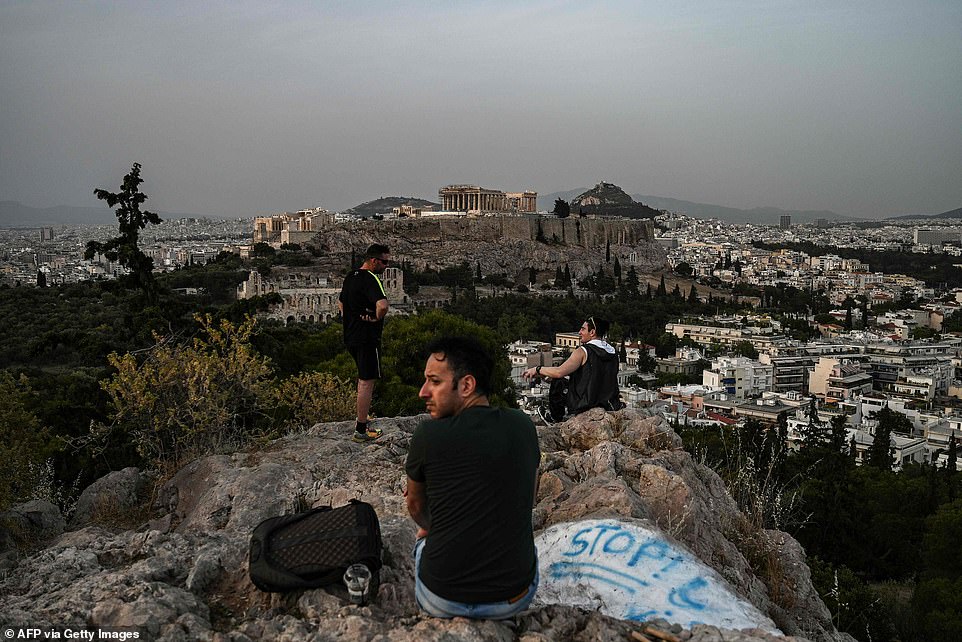 GREECE: People sit on a hill facing the Acropolis hill in Athens yesterday, as the famous landmark is re-opened to visitors today 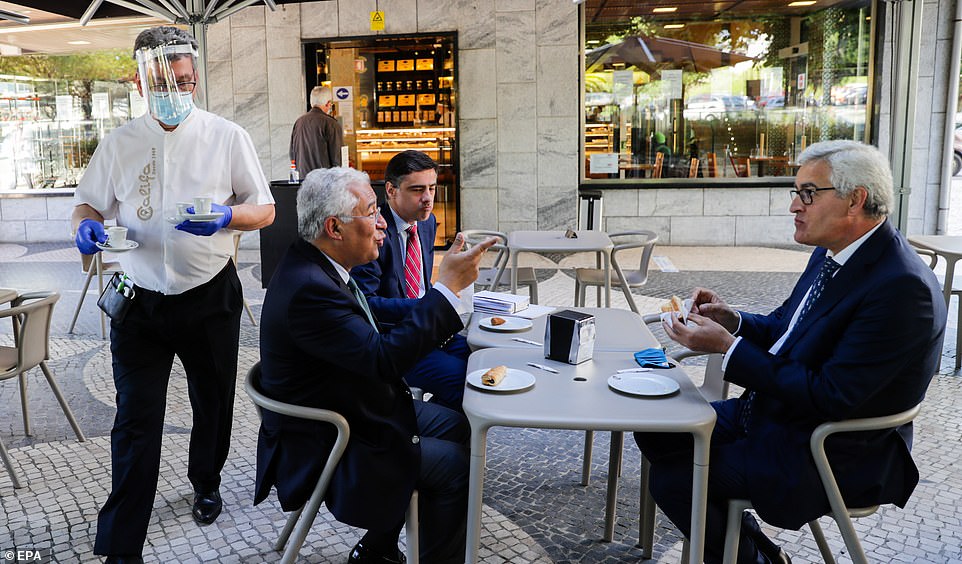 PORTUGAL: Prime minister Antonio Costa (seated left, gesturing with his right hand) has breakfast with two officials at a pastry shop which re-opened in Lisbon this morning

In Italy, restaurants and cafes can open again from today as long as their tables are spaced at least two metres (6.5ft) apart.

Shops, bars and hairdressers can also re-open today as Italy seeks to revive its economy after two months of lockdown.

Traffic was noticeably busier in major cities this morning, but business owners fear that normal life will be slow to resume.

‘A lot of people are just walking past and looking in from outside wondering whether they can come in or not,’ said Angelo Lombardo, a cafe owner in Bologna.

By contrast, phones were ringing constantly in hair salons this morning as Italians seek their first haircut since the emergency measures were introduced.

‘I already have 150 appointments, all very urgent, all of them insisting that they must be first on the list,’ said Stefania Ziggiotto, a hairdresser in Courmayeur.

Italy imposed a national lockdown on March 10, earlier than any other European country, and only began to lift it on May 4.

From June 3, EU nationals will be allowed to enter Italy without a quarantine period – a move which Italy hopes will revive its tourism sector.

Church services can also resume today, including in the Vatican where believers had their temperatures checked as they entered St Peter’s Basilica today.

‘I share the joy of those communities who can finally reunite as liturgical assemblies, a sign of hope for all society,’ Pope Francis said during a live-streamed prayer.

Francis is not expected to greet worshippers inside the basilica or in St Peter’s Square as the Vatican seeks to avoid crowds.

However, the Pope will celebrate a private mass in front of the tomb of Pope John Paul II, who was born 100 years ago today. 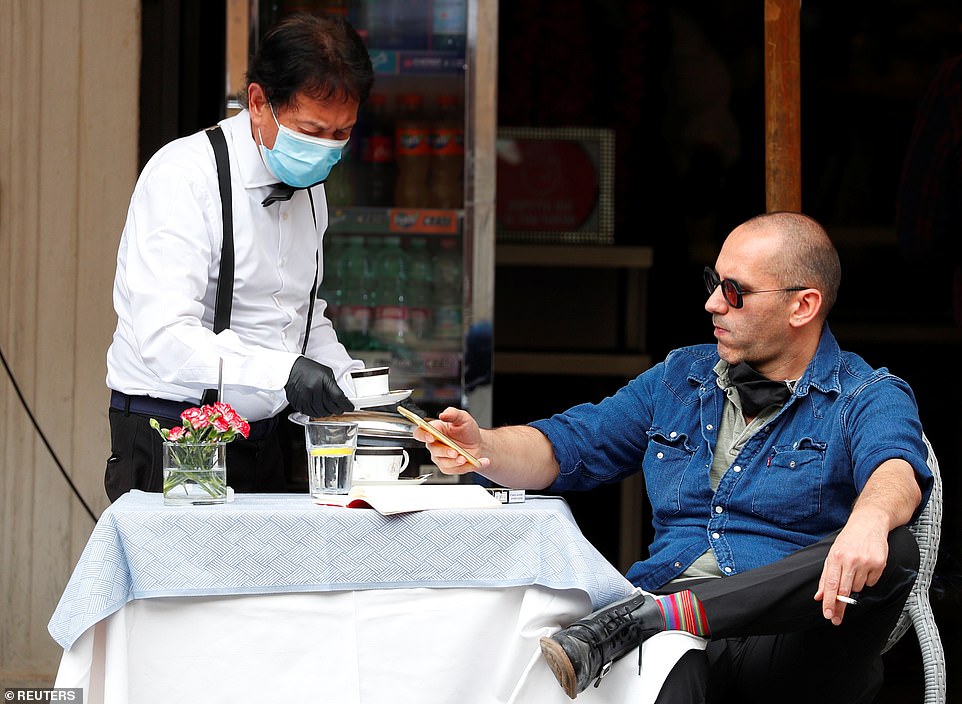 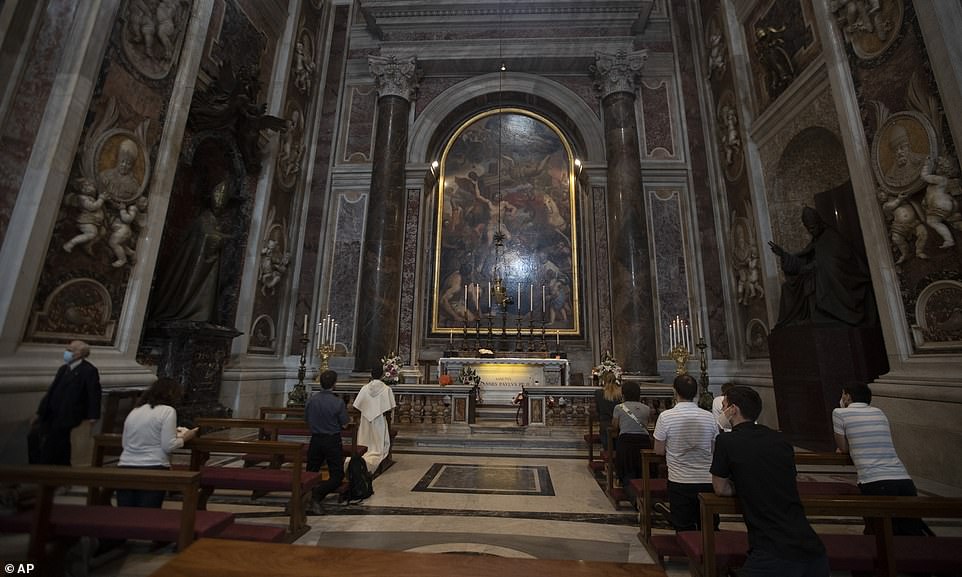 Worshippers pray in the John Paul II chapel in St Peter’s Basilica today, as the re-opening of the church coincides with the 100th anniversary of the former Pope’s birth 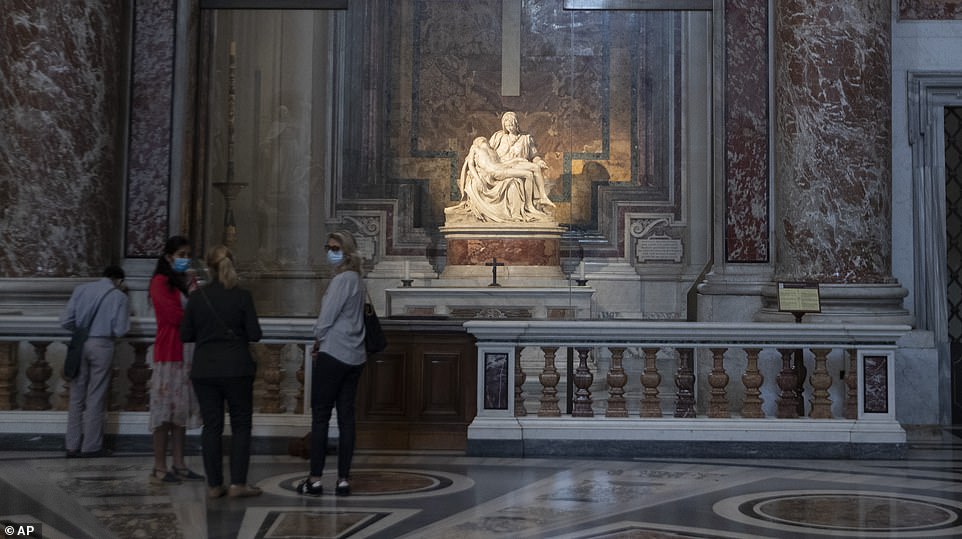 Visitors to the basilica look at an artwork by Michelangelo today, with St Peter’s Basilica opening alongside other churches 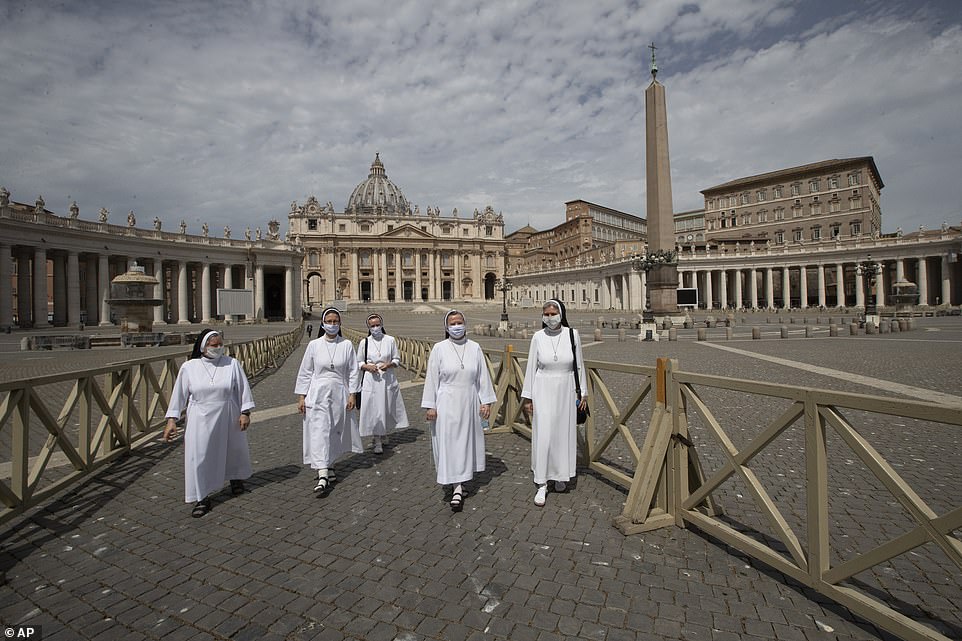 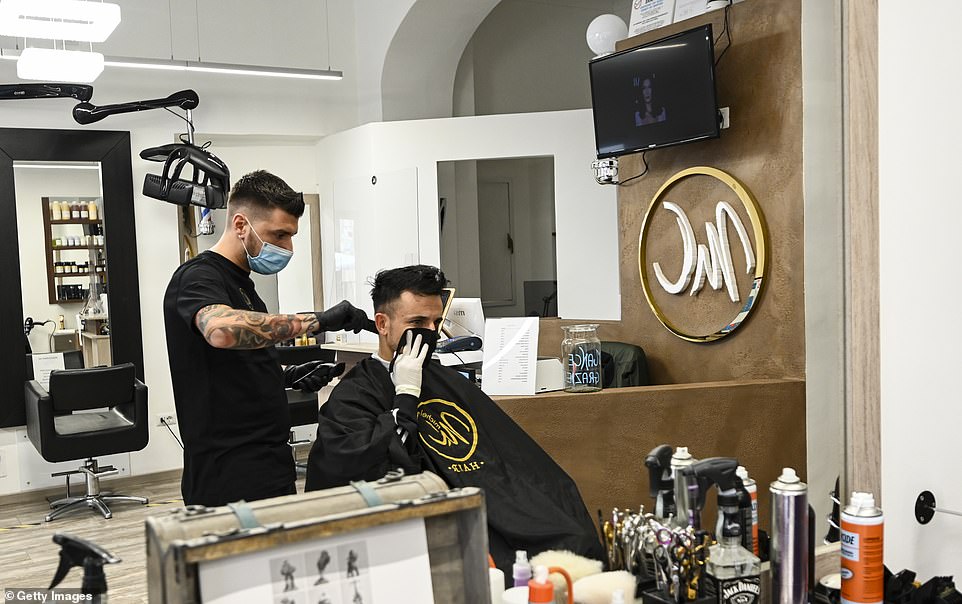 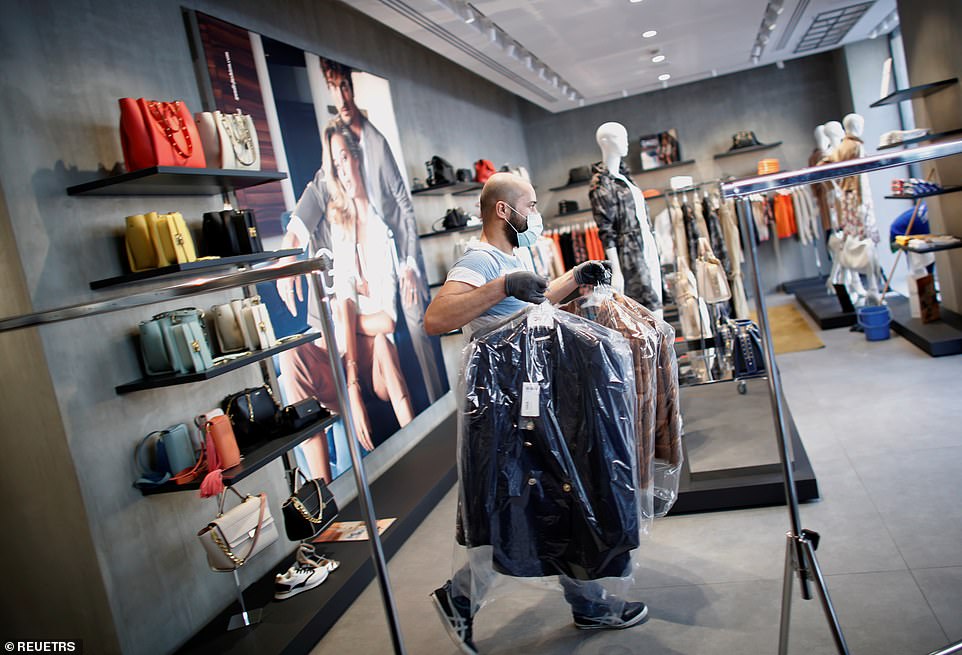 Spain is relaxing lockdown measures in much of the country today by permitting outdoor seating in bars and restaurants.

People are allowed to meet friends and family in groups of up to 10 people under the new rules.

However, the easing does not apply to Madrid and Barcelona because they do not yet meet the health ministry’s criteria for easing the lockdown.

Much of the Castile y Leon region which neighbours Madrid is also remaining under stricter lockdown measures.

Spain was now ‘very close’ to putting an end to the transmission of the virus, thanks to the efforts of the population, said health emergency chief Fernando Simon.

He warned, however, that the danger of a second wave of infections was ‘still very big’.

For that reason, the government wanted ‘to reinforce the compulsory nature of face mask wearing’, health minister Salvador Illa said.

A decree on the subject will be published in the coming days, he added. Wearing a mask is already obligatory on public transport. 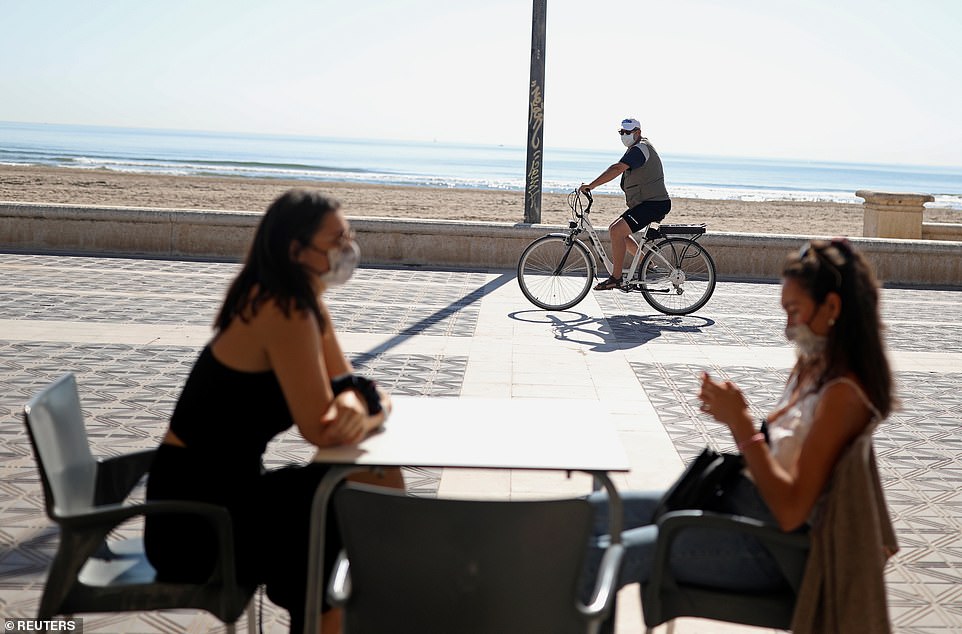 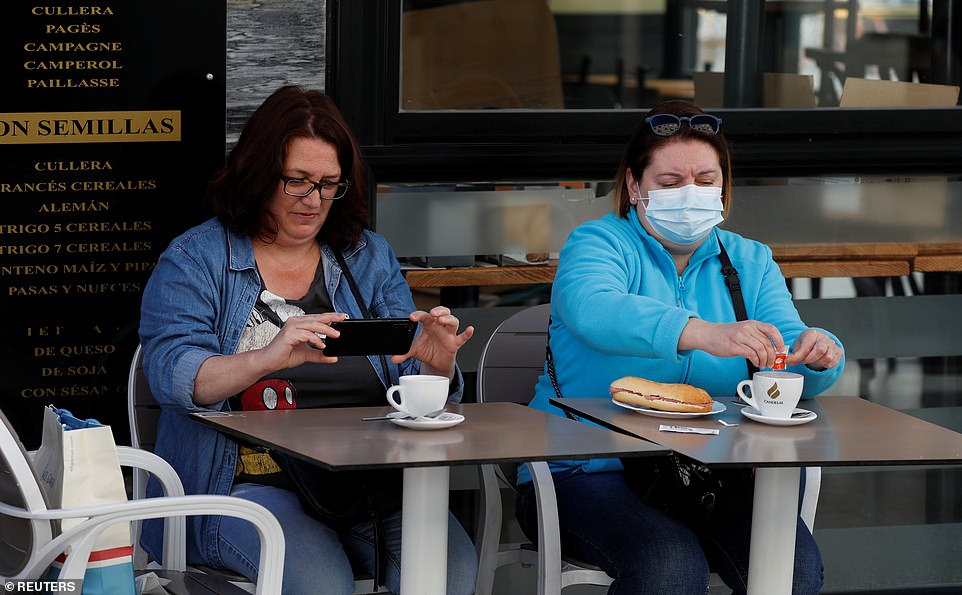 Two customers sit at outdoor tables at a cafe in the Spanish city of Ronda today as much of the country lifts lockdown measures, although not Madrid and Barcelona 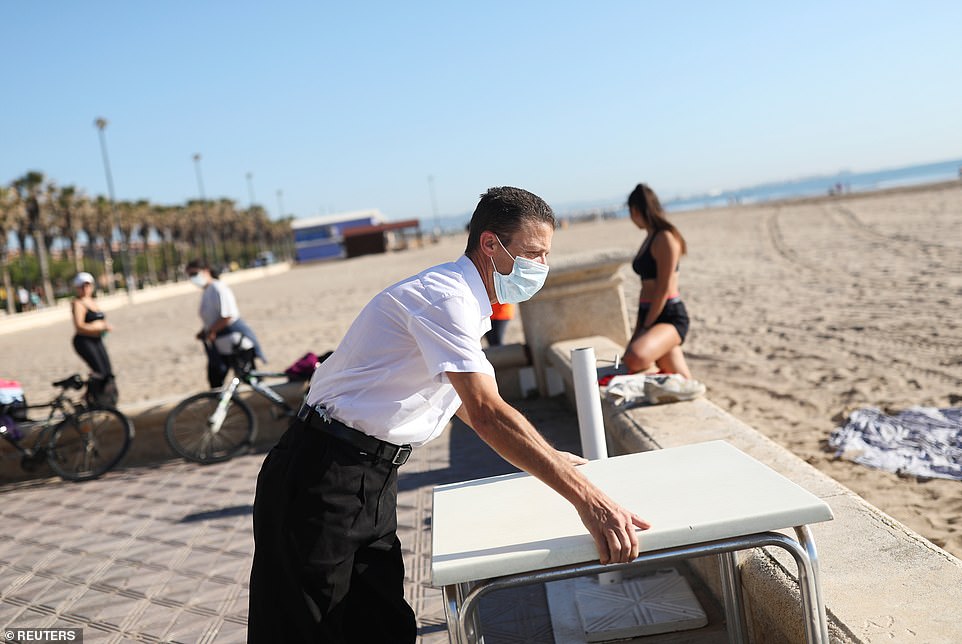 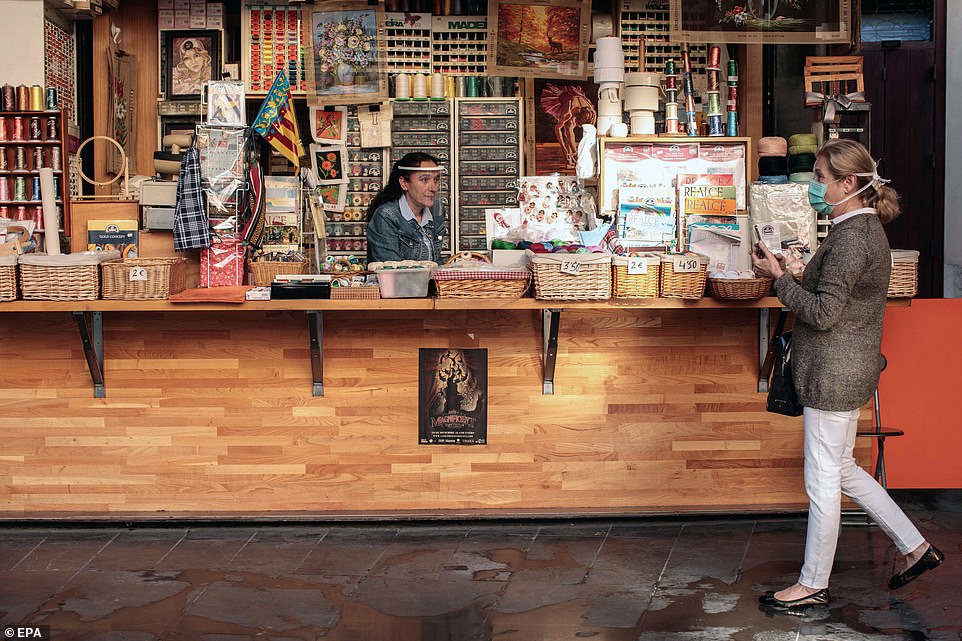 A vendor wearing a face shield waits for customers at a street market in Valencia today, with a masked woman walking by

Greece reopened the Acropolis in Athens and all open-air archaeological sites in the country to the public on Monday after a two-month closure.

A clutch of tourists and masked reporters gathered at the world-famous site, the most-visited monument in Greece.

‘We have never seen so few people at the Acropolis,’ a Russian visitor accompanied by her husband said.

‘It’s like having a private visit,’ said the woman, who has lived in Athens for five years.

President Katerina Sakellaropoulou was among the first visitors to the ancient Greek complex that sits on a rocky outcrop overlooking the capital and which had been closed since March 23.

Separation screens have been put up and the sites have been disinfected, the culture ministry said.

Visitors will be encouraged to wear masks – which will be compulsory for guides at the site – and guests will be asked to stay 1.5 metres (5ft) apart.

But all museums will not be open until June 15 under the government’s plan to gradually lift restrictions.

Athens expects the economy to contract nearly five percent this year, partly due to the loss of tourism income.

With 163 deaths from the virus, Greece started easing the measures this month after a six-week lockdown with an eye to salvaging the vital tourism season. 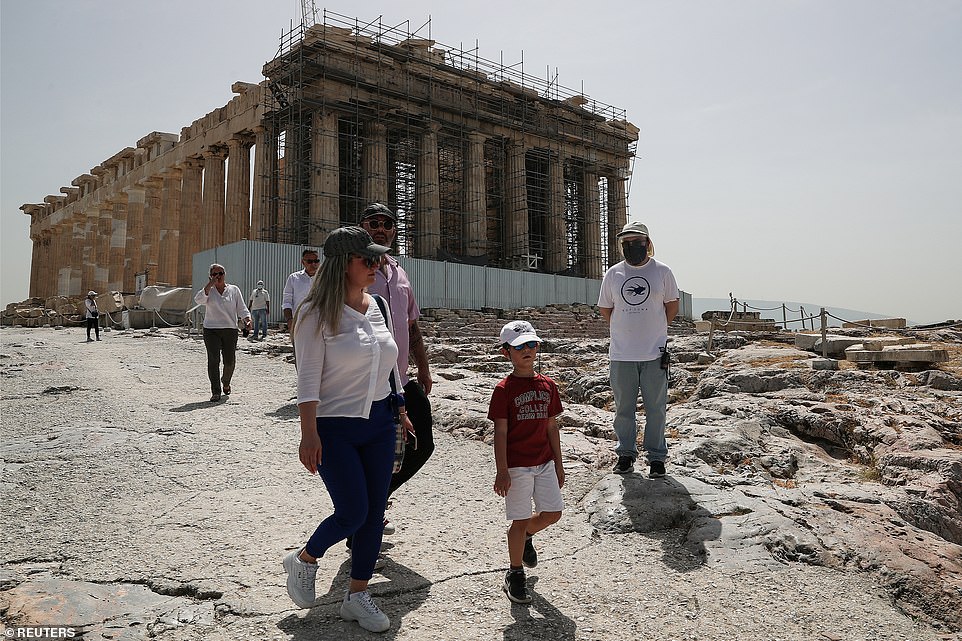 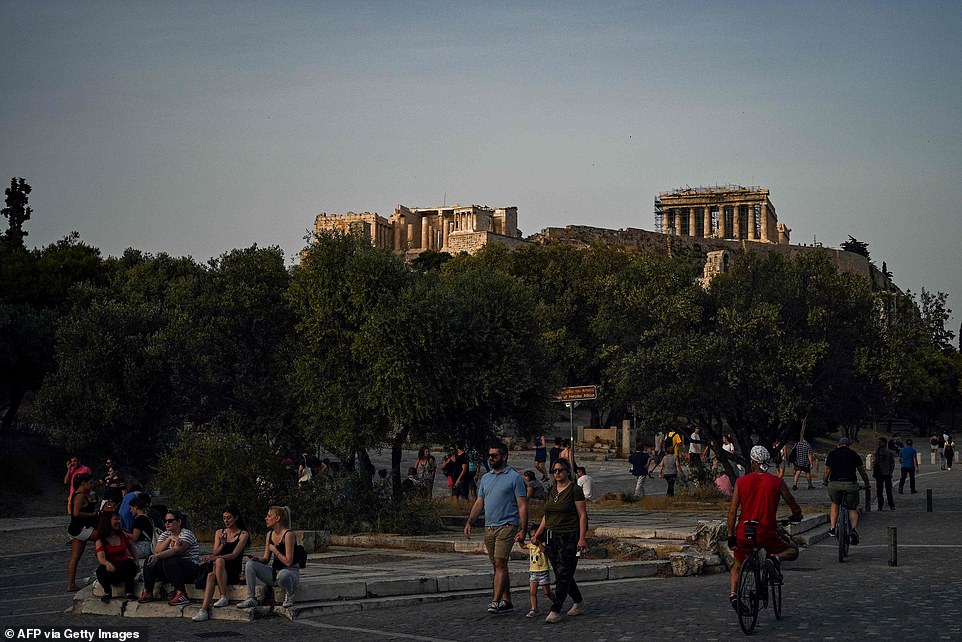 Some secondary schools are returning in France today, with children wearing masks and having their temperatures checked as they lined up for class this morning.

To ease the fears of parents, the government has given them the choice to allow their children to return to school or remain under lockdown at home.

Unions have criticised the decision to reopen the schools, calling it ‘premature’.

More than 300 mayors from the Paris region, including the capital’s mayor Anne Hidalgo, warned against rushing children back, as well as the financial cost for smaller towns and the threat of legal action if pupils fell ill.

French people can now venture outdoors again without filling in a permit, and some shops have re-opened their doors.

Other secondary school pupils will return next week, while some church services have also resumed and people can now travel up to 60 miles from their homes. 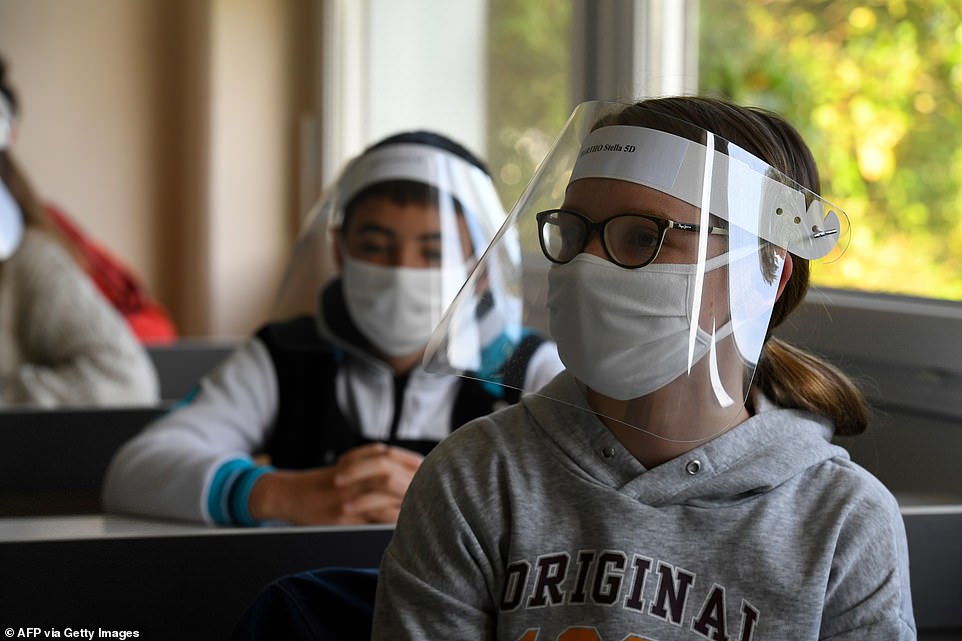 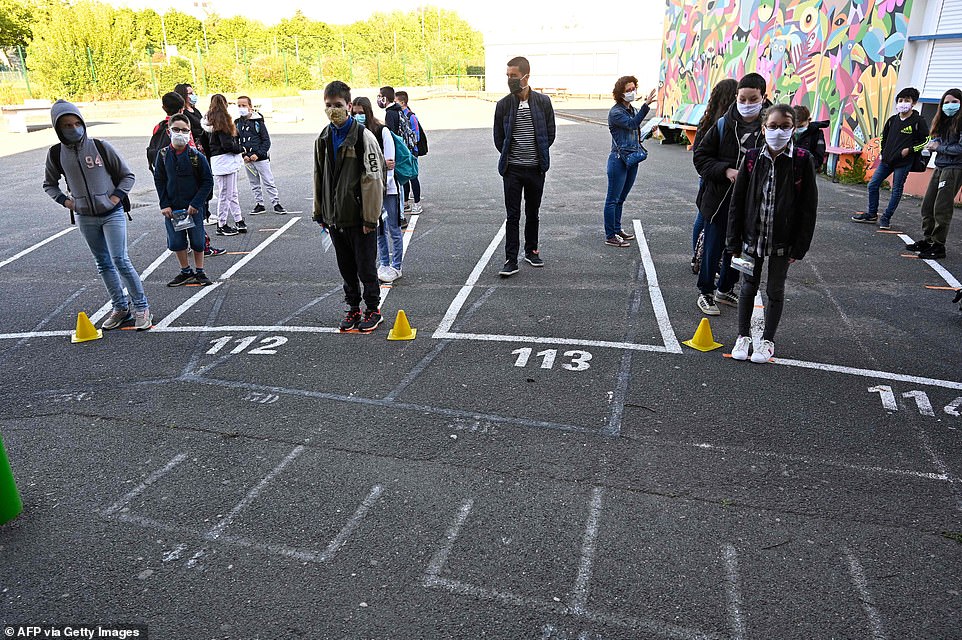 Pupils wait outdoors at the school in Angers, with a teacher wearing a mask inspecting the children’s safety distance

Ireland launched the first tentative step in its plan to lift the lockdown on Monday, with staff returning to outdoor workplaces as some shops resumed trade and sports facilities unlocked their doors.

The modest tweaks to the restrictions in place since 28 March start a staggered process set to stretch until August.

‘I’m both pleased and nervous,’ health minister Simon Harris told state broadcaster RTE. ‘I’m pleased that we’ve gotten to this point because of the incredible efforts of the Irish people in suppressing this virus.’

Shops such as garden centres, hardware stores and farmers markets were permitted to open their doors whilst outdoor staff such as builders and gardeners returned to workplaces.

Meanwhile citizens were permitted to meet in small gatherings outside of people from different households.

But Harris urged caution as the republic took its first step in trying ‘to live successfully and safely alongside the virus’. ‘Just because somewhere is open doesn’t mean we need to go,’ he said.