Hurricane Hanna is expected to make landfall along the Texas coast sometime Saturday. Hanna is the first hurricane of the 2020 Atlantic hurricane season. 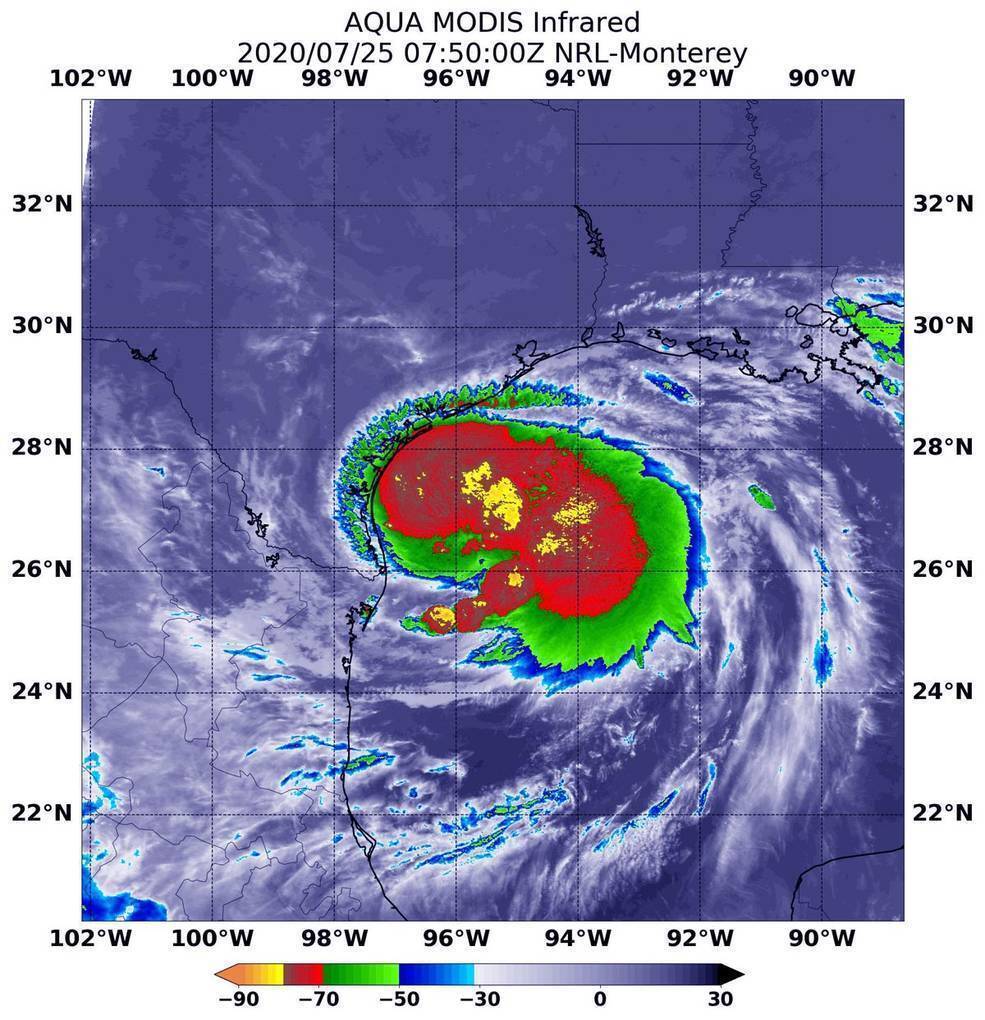 Hurricane Hanna is expected to make landfall along the Texas coast sometime Saturday. Hanna is the first hurricane of the 2020 Atlantic hurricane season.

Hurricane Hanna is expected to make landfall along the southern coast of Texas on Saturday. The storm strengthened overnight into a Category 1 hurricane, making it the first hurricane of the Atlantic hurricane season.

The storm is expected to bring heavy rainfall to the region with the potential for “life-threatening flash flooding,” according to the National Weather Service. A Saturday morning forecast from the National Hurricane Center said the storm was strengthening as it neared the coast with maximum sustained winds nearing 80 mph.

The center warned of storm surges as high as 5 feet along Texas’ southern coast and said the upper coasts of Texas and Louisiana could expect 3-5 inches of rain. Isolated tornadoes could also appear.

Texas Gov. Greg Abbott said earlier in the week that the Texas Division of Emergency Management was preparing teams to help communities affected by the storm. He urged residents in the region to avoid roads that flood and listen to local warnings as the storm prepares to make landfall.

“I urge Texans across the state to monitor the weather in their area and take necessary precautions to protect themselves and their loved ones from possible flash flooding and heavy rainfall,” Abbott said in a statement.

The city of Corpus Christi in Nueces County, which is already dealing with a spike in confirmed coronavirus cases, was among the communities bracing on Saturday for Hanna’s arrival. On Friday, Nueces County reported 175 new cases of the coronavirus and five deaths. Of the county’s 129 COVID-19 deaths, 119 of them have come in July, according to the Corpus Christi Caller-Times.

Ahead of the storm’s landfall, the city closed at least one drive-through testing site through Tuesday, according to The Texas Tribune.

As Hurricane Hanna approaches, Corpus Christi Mayor Joe McComb said he felt certain that the region is prepared to handle both the storm and the pandemic.

“Don’t feel like since we’ve been fighting COVID for five months that we’re out of energy or we’re out of gas. We’re not. We can do these two things together and we’re going to win both of them. And so, we’ll get through this,” McComb told The Associated Press.

But McComb’s comments also reflected the realities of the pandemic as he urged residents to take masks with them if they have to evacuate and stay with others.

“We don’t want to expose anyone during this storm. … Even when you’re in the house, I recommend wearing a mask if you’re in crowded conditions” McComb told The Texas Tribune.

To the south of Corpus Christi in Cameron County, Judge Eddie Treviño told the AP that if families are evacuated to shelters, there are plans in place to make sure they are socially distanced from one another.

By Saturday morning, Hurricane Hanna was about 85 miles from Corpus Christi and moving at a rate of 7 mph. As the storm continues to make its path toward south Texas, two other storms are being watched closely. Hurricane Douglas is in the Pacific and is expected to either pass nearby or over the main Hawaiian islands between Saturday and Sunday evening. The National Hurricane Center warned of a “triple threat of hazards,” including heavy rainfall and flooding, damaging winds and dangerously high surf.

Farther to the east and south of the Gulf of Mexico and Hurricane Hanna, Tropical Storm Gonzalo is expected to bring heavy rainfall to the Windward Islands on Saturday with the potential for “life-threatening flash flooding.”

Earlier this year, forecasters from the National Oceanic and Atmospheric Administration predicted an above-average hurricane season with at least three to six major hurricanes in 2020.