SINGAPORE — Former Australian Prime Minister Malcolm Turnbull has urged his successor, Scott Morrison, to stay the course even as Beijing ramps up pressure on Canberra to soften its China policy.

Already tense bilateral relations worsened further in April after Australia called for an independent inquiry into how the coronavirus pandemic, which originated in the Chinese city of Wuhan, was initially handled. Since then, Beijing has slapped tariffs and import bans on Australian beef and barley while warning its citizens against traveling to the country, citing incidents of alleged discrimination against Asians.

Polling indicates Morrison’s stance has broad public support, but there is dissent among Australian elites fearful of the economic consequences, especially after Chinese investment in Australia dropped by 58% in the 2018-19 financial year, according to a recent report from KPMG and Sydney University. Turnbull would have none of this when he spoke with the Nikkei Asian Review.

“The indignation from some quarters [toward the proposed investigation] has been a complete overreaction,” said Turnbull, who led the country from 2015 to 2018.

“Quite a few Australians fall into the trap of thinking Australia is a beneficiary of some Chinese favor. But China doesn’t buy iron ore because they like Australians or kangaroos or koalas. They buy it because it’s good quality and value.”

Amid the heightened tensions, the Victoria state government has insisted on continuing with a controversial Belt and Road Initiative agreement with China. Mining and media mogul Kerry Stokes warned recently that the Australian dollar would crash if China cut off trade. And John McCarthy, a retired top diplomat, has called Morrison’s foreign policy “extraordinarily ill-considered.”

Turnbull sounded unconvinced by these arguments, though he did stress that Australia should avoid giving the impression that it was blaming China to seek favor with the U.S.

“America’s mishandling of the pandemic is something for which only Americans can be responsible,” he said. Instead, he suggested a “no-shame, no-blame investigation” examining the origins and management of COVID-19, as well as the success of governments like Taiwan’s in stopping it.

The 65-year-old was speaking from his Sydney home, where he has been on a virtual book tour for his new memoir, “A Bigger Picture.” The bestseller received much buzz on the back of Turnbull’s barbed takes on domestic political rivals. Tony Abbott, who overthrew Turnbull as leader of the center-right Liberal Party before being ousted by his more moderate predecessor, is criticized for “crazy” and “weird” behavior, like winking when an economically distressed voter mentioned that she had turned to working on a sex line.

Abbott, for his part, has called some of the comments in Turnbull’s memoir “pretty odious.”

Turnbull is not particularly flattering when it comes to Donald Trump’s impact on America, either. And while he has “no doubt that Australia can and should” count on the U.S., Turnbull cautioned against assuming that a Joe Biden administration would automatically return to a pre-Trump status quo.

One of Turnbull’s signature accomplishments was working with Shinzo Abe, his Japanese counterpart, to salvage what is now the Comprehensive and Progressive Agreement for Trans-Pacific Partnership after Trump withdrew the U.S. from the accord. Biden, who was vice president when Barack Obama signed the original TPP, has said that he wants to renegotiate the pact.

Regional leaders generally come across better in his book. Abe is a “mensch,” Singapore’s Lee Hsien Loong is “one of the wisest and most civilized of people” and New Zealand’s Jacinda Ardern is lauded for her superior powers of empathy.

A legal wunderkind turned Goldman Sachs partner who made a fortune during the dot-com era, Turnbull came to power on the back of his reputation as an economic manager. He was ultimately removed from office following a backroom coup led by right wingers who distrusted his social liberalism and environmentalism. While he personally remained relatively popular with voters and the economy kept humming, analysts say Turnbull likely took a hit from a sharp slowdown in wage growth that persisted through his tenure.

Morrison now has the task of reviving an economy that is in recession for the first time in nearly three decades. The International Monetary Fund forecasts that gross domestic product will shrink by 6.7% this year. But pre-coronavirus Australia also had an enviably low net debt-to-GDP ratio of 20%. The federal government has enacted a 260 billion Australian dollar ($179.5 billion) support package and will announce the fate of its AU$70 billion employment subsidy program in July.

“A good thing would be more investment in economic infrastructure and not just hard infrastructure … and more money into research and education,” said Turnbull. “Some very disruptive trends like the shift away from bricks-and-mortar retail have accelerated. There’s a lot of vulnerability there so you’re going to have to spend in some form or another to keep incomes up.”

Australia is one of the world’s largest exporters of coal and the collapse in the price of thermal coal and Chinese demand could presage a transformation of its AU$280 billion mining exports industry. Turnbull, a former environment minister, expects many Australian commodities to be further challenged by the shift to clean energy.

“But the great advantage we’ve got are unparalleled solar resources,” Turnbull said. “There are parts of Australia where the land cost is really low and there are very high levels of radiation. We could be a very cheap green energy environment with all the benefits that entails.”

Two Australian billionaires are currently funding an AU$20 billion project to supply solar power to Singapore via a giant cable. 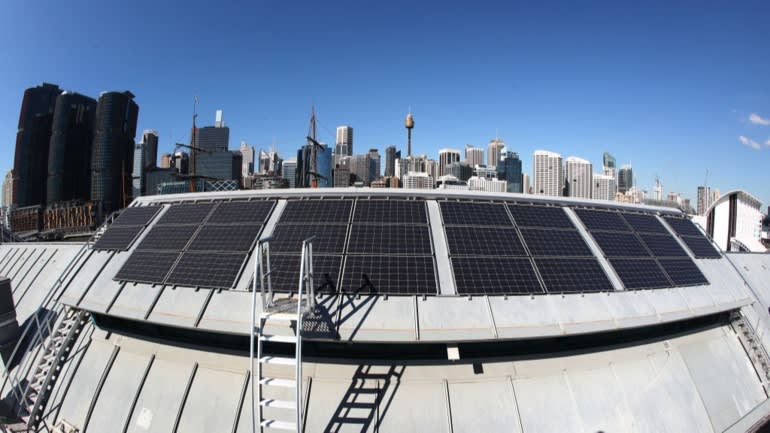 Solar panels in Sydney: Turnbull says “unparalleled solar resources” will be a big advantage for Australia.

Now a venture capitalist, Turnbull retains a personal interest in Australia’s struggling media industry. He played a key role in the creation of the Guardian’s Australian edition and was once among the largest shareholders in the then-parent company of the Sydney Morning Herald.

The sector is now in the global spotlight after Canberra moved to create a regulation that will require internet firms like Facebook to pay publishers for displaying news. News Corp Australia, whose newspapers Turnbull partly blames for his early political retirement, has suggested the bill could be as high as AU$1 billion annually.

While Turnbull wouldn’t comment on the code as it was being debated, he expressed doubts that it would address structural issues. “The fundamental problem is that the internet offers a more cost-effective form of advertising,” he said, recalling the astonishment of a youthful audience at a Sydney school talk when he mentioned leafing through newspaper classifieds to look for a car.

“I think they were waiting for me to say that newspapers were once carved out of stone like in ‘The Flintstones.’ It is another world.”