Why are the deputies leaving the ruling coalition of Moldova en-mass? In Moldova, a small country on the border of the European Union, a political crisis flares up against the background of the coronavirus pandemic. The ruling coalition, consisting of the Socialist Party of the incumbent President Igor Dodon and the Democratic Party, led by ex-Prime Minister Pavel Ftlip, is bursting at the seams. Over the last few days five deputies have left the Democratic Party already – writes Henry St George.

And it is taking into the account that only in January 7 deputies left  the party and its faction Today, the parliamentary majority that formed the government consists of 54 parliamentarians with the required minimum of 51 deputy mandates.

As a result, if another 4 people leave the ruling coalition, the balance of power in Moldova will radically change. The government subordinated to Dodon will be dismissed. For Dodon, who will face the presidential elections this fall, such a scenario is similar to death. 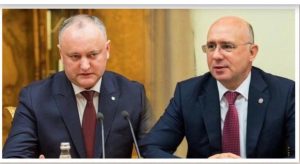 Despite the existence of serious disagreements, opposition represented by the parties of Ex-Prime Minister Maia Sandu, former Minister of the Interior Andrei Nastase, the new political force Pro-Moldova of the former Democrat, Ex-Speaker of the Parliament Adrian Candu and the formation of the entrepreneur and former mayor of Orhei city, Ilan Shor, apparently, will be ready to act as a united front against the current government, which has discredited itself by corruption scandals, an attempt to reorient foreign policy to Moscow and a weak anti-crisis management on to a pandemic.

Today, an unstable and fragile majority still exists. But the Democratic Party is being shaken by internal scandals, which periodically lead to the situation when both deputies and representatives of local authorities come out of it, and sometimes – the whole regional organizations do the same. Anyone who has at least once been interested in Moldovan politics can confirm: as a rule, nobody leaves the power for opposition voluntarily here. The current mass exodus from the party, which is part of the ruling coalition, demonstrates that its leader Pavel Filip and his inner circle have become so toxic that it threatens the future of the party and each of its members individually.

Everybody who is familiar with the peculiarities of relationships between people in Moldova is aware that in this country practically nothing can be hidden. Therefore, it is not surprising that Chisinau press reports the details about the scandalous discussions in the Democratic Party. They are interesting, informative and can clarify much about the features of the current regime in this post-Soviet republic.

So, it is reported that Pavel Filip has received 600 thousand dollars from Dodon for the election of a government acceptable to Igor Dodon, led by Ion Сhicu. In addition, he pledged to pay the leader of the Moldovan Democrats a monthly fee of $ 300 thousand. These considerable funds by the standards of Moldova, Philip bargained from Dodon for  the maintenance and promotion of the party, as well as on the provision of informal financial assistance to the Democratic Party deputies and the leaders of its territorial organizations.

The scandal in the party and its parliamentary faction flared up when it became clear that  more than 80 % of the money allocated by President Dodon were not used for its intended purpose and settled in Mr. Philip’s pockets. For many Democrats, this was the last straw that overflowed the patience. One by one, they announced their withdrawal from the DPM.

This information explains the strange fact that Pavel Filip, who pursued a tough pro-European policy as Prime Minister, participated in the resignation of the pro-Western cabinet of Maia Sandu together with the Socialists Party, and subsequently formed a coalition with the Kremlin-oriented socialists of Igor Dodon. As the saying goes, only business, nothing personal.

Pavel Filip, who for many years held senior positions in the manufacturing sector and the government of the Republic of Moldova, turned out to be a very vulnerable politician. Corruption scandals flare up around his figure one after another. After Philip resigned as prime minister, it became known that commercial companies close to him privatized a number of objects in the center of the capital of Moldova at prices well below the market.

At the time when Pavel Filip was the head of government, he was convincingly accused of monopolizing the market for collecting and exporting nuts. And up to this day, the unspoken title “head of the walnut mafia in Moldova” is attached to his name.

According to reliable sources, organizing corruption schemes in the leadership posts that Philip was appointed to has always been his style throughout his successful career. When he was the head of Chisinau tobacco factory, its production and commercial activities were organized in such a way that a certain percentage from each pack of cigarettes sold goes into his pocket until now. He organized the work of the Ministry of Information Technology, which was engaged in the production and issuance of official documents, in the same way. There is an invisible financial interest of Pavel Filip in every Moldovan passport.

More recently, it turned out that the Public Services Agency, which is engaged in documenting of citizens, rents most of its offices from … Pavel Filip, and is paying huge amounts to him regularly.

All this makes the leader of Moldovan Democrats a convenient and manipulable ally of President Dodon. Dodon controls the power structures, including the Ministry of Internal Affairs, the National Anti-Corruption Center, the Information and Security Service, and the Prosecutor’s Office. Filip’s refusal from coalition cooperation will immediately provoke criminal prosecution on numerous facts of corruption and profiting from official position.

The alliance between Dodon and Philip is built on blackmail and corruption schemes. And this makes the coalition vulnerable to harsh and legitimate criticism from the opposition and Moldova’s western partners, who don’t really like that the hundreds of millions of euros transferred to the country go not only to support the pro-Moscow regime, but also fall into the hands of corrupt leaders of the ruling coalition.

For many members of the Democratic Party, the reputation of its leader and the ulterior motives driving the ruling alliance become a huge problem. And the problem of Moldova, and their personal problem. They cannot but understand that the country will be in a deep crisis under the leadership of this vulnerable and weak coalition and that the DPM political project will inevitably collapse. And that their careers will be buried under the wreckage of the recently ruling party. That is why they are leaving. And this process may become even more widespread in the nearest future.

But at the end of the day this is  the business of the party members.

But the fact that Mr. Filip sold the future of Moldova for $ 1 million is a tragedy of the whole country and all its citizens.

And so a big blow to the efforts of external partners who, in addition to significant human and intellectual resources, over the past 25 years have provided financial support to Moldova for more than $ 4.0 billion, $ 1.5 billion from the United States and $ 2.5 billion from the European Union