Air Force Gen. John Hyten speaks at Offutt AFB in Nebraska during a change of command ceremony at U.S. Strategic Command, in November. Joint Chiefs Chairman Gen. Mark Milley is behind, listening. Hyten is now vice chairman of the Joint Chiefs of Staff. 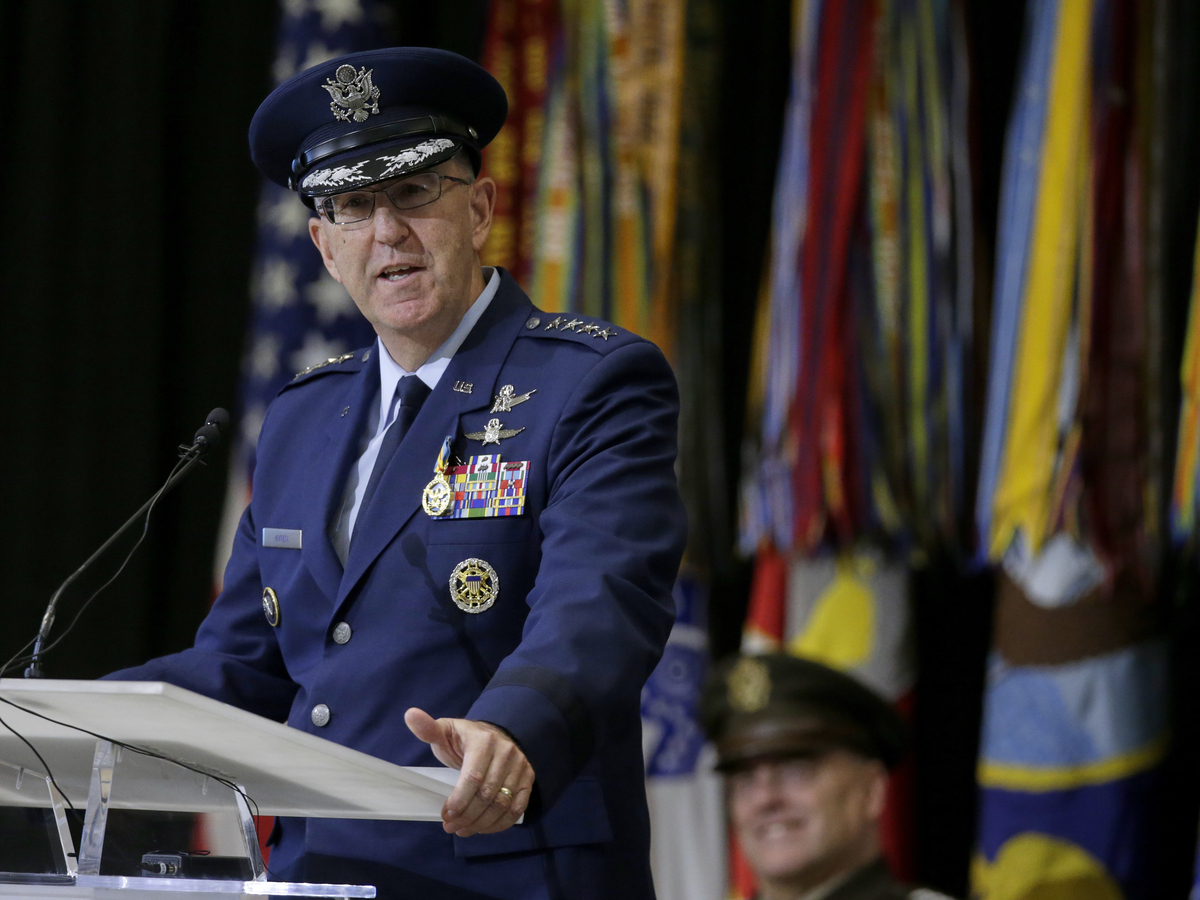 Air Force Gen. John Hyten speaks at Offutt AFB in Nebraska during a change of command ceremony at U.S. Strategic Command, in November. Joint Chiefs Chairman Gen. Mark Milley is behind, listening. Hyten is now vice chairman of the Joint Chiefs of Staff.

The number-two American military officer, Air Force Gen. John Hyten, says the Pentagon must do more to create a diverse force, and also must deal with the rising problem of sexual misconduct by looking for answers outside the military.

Hyten, vice chairman of the Joint Chiefs of Staff, made his remarks in a wide-ranging interview with Steve Inskeep on NPR’s Morning Edition.

Asked about calls to change the names of American military bases named after Confederate generals, among them Fort Bragg, N.C., Hyten acknowleded some military personnel want to do so, adding that it would be a “good symbol.”

But Hyten said for the most part, he’s told by the enlisted personnel and officers he meets that they want “more meaningful change.”

“And what they point out to me is that when they look at the Joint Chiefs of Staff, they see all old white males and they say, ‘I would like to see a military …. see myself in the most senior leadership positions in terms of myself in terms of my background, my race, my sex.”

Hyten observed that the incoming Air Force chief of staff, Gen. Charles Brown, will be the first African American to sit on the Joint Chiefs since Gen. Colin Powell ended his term as chairman in 1993.

Hyten said the percentage of minorities in the enlisted ranks of the military is higher than in the U.S. population at large, but not so in the officer corps.

That gap is stark in the small number of female African American military pilots, just 72 out of more than 3,300 women, according to a recent analysis by McClatchy News Service.

Hyten said the number of minority personnel in operations – such as pilots and infantry and armor – is small, and those are the areas where officers are most often slated for promotion. The Pentagon, he said, has to do a better job recruiting and developing diverse officers by expanding its efforts to different parts of the country and different schools.

Addressing another chronic challenge facing the military, Hyten said the Pentagon must finally look beyond uniformed leaders to deal with the ongoing and increasing incidence of sexual assault and sexual harassment in the ranks.

“I think we have a problem with sexual harassment and sexual assault in the military,” Hyten said.

Hyten said he and Joint Chiefs Chairman Gen. Mark Milley have decided to go outside the military to search for answers.

“I think we have to go outside of our culture to solve this problem,” Hyten said.

Hyten himself was accused of sexual misconduct last year by a female Air Force officer who was one of his aides. She accused the general of unwanted touching and kissing. An Air Force investigation found no evidence to support the allegations. Following several closed-door Senate Armed Service Committee hearings, not one senator supported the accusations.

Asked about this, Hyten said: “The truth matters. The truth will come out.”

Hyten said his daughter told him he had two options in terms of his response. The first, to put his head down and pretend it never happened, and just get on with his life. The other option, she said, ” ‘You can make an effort to try to make a difference.’ And so when your daughter says something like that to you, you really only have one choice, and that’s to try to make a difference.”

Hyten, who serves on the Pentagon’s coronavirus task force, agreed with immunologist Dr. Anthony Fauci who said the U.S. is not doing as well as other countries in combating the virus.

“I can’t say everything is going as well as I would have liked it at this point,” Hyten said. “So, I can’t disagree with Dr. Fauci that way. But I do think we’ve made significant improvement in many, many areas.”

Hyten also said, regarding military testing for the virus, “We’re in a pretty good place,” though there’s still a “significant supply concern” in the next couple of months. “We just got to make sure we stay that way as we go through the fall.”

The general, a Harvard graduate who has specialized in missiles and space operations, said the challenge for the military in the coming years – against a possible adversary like China — is to bring together all military options: Army, Navy, Air Force as well as space and cyberspace to “simultaneously and seamlessly” go after a foe.

“And developing the capability to do that,” Hyten says, “is going to be one of the biggest challenges in the next five years.”