One of government’s top epidemiologists says there is “considerable uncertainty” over the spread of the coronavirus and the effectiveness of the state and people’s interventions to slow the spread of Covid-19.

Dr Harry Moultrie, a senior medical epidemiologist at the National Institute for Communicable Diseases (NICD), is a key member of the ministerial advisory committee (MAC) and is intricately involved in mapping and modelling the spread of coronavirus.

He said it was expected parts of the country’s healthcare system would be overwhelmed as a result of an expected “rapid increase in the number of Covid-19 cases over the next few months”.

It would take a few more weeks until a proper study on the effectiveness of the lockdown could be conducted, Moultrie added.

Analysis of coronavirus data reported by the Department of Health shows this increase has already begun. As of the past week, Covid-19 cases are rising at the highest rate since the outbreak began on 5 March.

“We anticipate the number of Covid-19 cases will increase rapidly in the next few months. The national and provincial health departments are preparing the healthcare system to respond to the increase … however, it is unfortunately likely that the health-system capacity will be overwhelmed in some areas of South Africa during the next few months,” Moultrie said.

The chairperson of the MAC, Professor Salim Abdool Karrim, however said this week increases in cases, currently at around 330 per day on average, was not yet a cause for concern.

In the past three days, the highest single-day increases in cases was reported – 447 new cases on Sunday, and 437 new one on Monday. On Tuesday, 352 new cases were reported.

READ | Ramaphosa on Covid-19: We’ve got to plan for the worst, as the worst is still coming

While increased infection rates have long been predicted, the easing of lockdown effective as of 1 May, saw more than one million people returning to work and some retail shops being allowed to reopen.

“As contact rates between people increases as a result of the necessary easing of the lockdown, the epidemic growth rate will increase.

“There, however, remains considerable uncertainty regarding both biological aspects of SARS-CoV-2 transmission and the quantitative effectiveness of interventions by the government and individuals to decrease transmission,” Moultrie said.

An analysis of positive cases reported by the Department of Health since 5 March found in the past week (28 April to 5 May), cases increased by an average of 347 new cases per day. This is calculated by taking the daily number of new cases over the previous week and conducting a simple average calculation.

This was a method of tracking first suggested by Karim.

Average daily increase of cases, calculated over a week of daily infection rates, shows a steady rise in the average number of new infections per day. (Graphic – Rudi Louw) Click here for a high res version.

In recent days, the average daily increase has grown consistently – as seen in this graphic which also shows the dip as a result of the travel ban and banning of mass gatherings as well as the closure of schools from 18 March – the lowest point being an average of 52 cases per day.

Bearing in mind that data from active and passive case finding is reported together, between 20 and 27 April, the daily average increase was 204 new cases using the same weekly average method, and for the previous week of 13 to 20 April, it was 140.

Karim later said the MAC was looking for a new tracking method as active case finding data from a mammoth screening and testing programme would mingle with previous and new passive cases making the comparison of data from before the screening programme began with newer data unwise.

“It is also important to note that the observed epidemic growth rate is a function of testing coverage, criteria for testing and social distancing interventions,” Moutrie said.

He added since testing and the criteria for testing have eased over the first month of the local epidemic, “there was considerable uncertainty of the true growth rate in the pre-lockdown and lockdown phases”.

“We will be better placed to quantify the effectiveness of the lockdown in a few weeks’ time. It is, however, apparent that the lockdown has slowed transmission and bought us precious time to prepare the healthcare system for the rapid increase in Covid-19 cases we are likely to see in the next few months,” Moutrie said.

Increased screening and testing, which is targeted at people showing symptoms, has resulted in more than seven million people being screened, of which roughly 43 000 were referred for testing.

But, crucially, the data is not showing the infection rate – the rate at which the virus is spreading – and no official data is speaking to the number of people tested positive from those found during screening.

As of 5 May, the Department of Health reported 268 064 tests had been conducted, across public and private laboratories – approximately 5 000 in each sector per day. 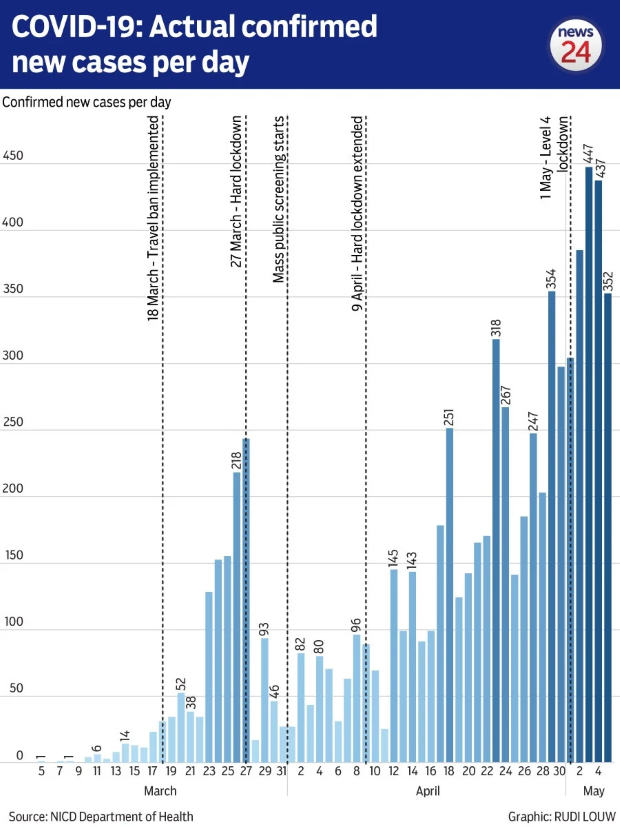 A graphical representation of the daily reported cases shows a drop in new cases from around 27 March, the effect of a travel ban instituted on 18 March. But around 18 April, a little over two weeks into a nationwide hard lockdown, the daily increases start rising again, surpassing the previous peak.

According to Professor Cheryl Cohen, also an epidemiologist at the NICD, in a previous interview, it was widely accepted testing had missed cases, meaning the true number of infections was not known.

Only wider testing will eventually show how many people had, or have, the coronavirus.

This leaves serious doubts over the accuracy of reported data, as what is being reflected in the numbers issued by the Department of Health, is likely not a reflection of the true spread of Covid-19.

Karim spoke of this weekly average needing to remain below 90 per day before lockdown could be lifted – but this was in reference to passive case finding only – when people presented themselves for testing after noticing symptoms.

Now, with the mixed bag of active and passive cases, this approach would need to be revisited in its entirety.

The exact calculation used in deciding to implement the risk level approach to lockdown has not been shared publically.

Scientists agree the rate of infection is likely to continue increasing, with previous government projections showing the peak infection rate expected around September.

Professor Tulio de Oliveira previously told News24 the increase could be as high as 10% per day.

The rate of increase is hard to predict but the easing of restrictions now in place would likely contribute to a higher increase rate as contact between people became more frequent.

Social distancing, hygiene regimens and the wearing of masks, measures advised since the start of the outbreak, would likely continue to temper the rise in infections, Karim said during an interview with the SABC on Tuesday morning.

He told the broadcaster he was not overly concerned with daily increases of around 300 cases as it was within expected bounds.

Karim told News24 last week he expected the infection rate to increase, but could not say at what level.

“Hopefully, we will still practice social distancing and so on, so that the rate at which it increases will be tempered, and I think we will see a slow and steady rise in cases,” he said.

“I think that will sort of lead to a point where it will rise more rapidly.” The weekly increase in reported cases, shown here on a sliding seven-day scale, which confirms a trend of infections rising steadily. (Graphic – Rudi Louw) Click here for a res version.

This graphic represents the increase in case numbers week on week, and again illustrates that the rise in cases expected is starting to occur, albeit the early stages of that increase.

The lowest weekly growth after the declaration of the national state of disaster and the accompanying travel ban, banning of mass gatherings and closure of schools which took effect from 18 March was the week of 30 March to 6 April – a reported 406 cases for the week.

In comparison, the week of 28 April to 5 May, shows a weekly increase of 2 779 cases, a steady rise that is represented again, as a steady climb in confirmed cases – and the rate at which they are being found.

“It is therefore imperative that all members of society take responsibility for reducing their risk of infection, and the risk of transmitting the infections to others, to the best of their ability,” Moultrie said.