The reopening of the park, which closed on Jan. 25, marks the first theme park operated by Walt Disney Co. to restart as the pandemic forced shut the others around the world.

It follows the resumption of other landmark tourist attractions in China, including Beijing’s Palace Museum and Shanghai’s Oriental Pearl TV Tower.

Entry tickets for the next seven days were sold out after they were made available online on Friday through Shanghai Disneyland’s website and official travel partners, local news media reported. They range from 299 yuan to 499 yuan ($42 to $70) for per-day entry.

“We have waited for more than three months,” Cao Ling said at the entrance to the theme park on Monday. Cao, a housewife, and her daughter said they came from Suzhou, a nearby city, to make up for a canceled trip during the Lunar New Year holiday at the end of January.

Visitors wait for the reopening of Shanghai Disneyland on May 11. China has begun to allow the reopening of outdoor tourist attractions gradually since last month but has imposed crowd-control measures.

The Chinese government has begun to allow the reopening of outdoor tourist attractions gradually since last month but has imposed crowd-control measures, including a 30% cap on the number of visitors of what is considered to be full capacity at any given venue.

Shanghai Disneyland’s visitor entry would be “far below” the stipulated limit, Walt Disney Co., its U.S. parent company, said last week, but local media put the number at 20%. The theme park opened in June 2016 and is capable of hosting 80,000 visitors daily.

Aside from the entry limit, the theme park also is implementing preventive measures that include social distancing in queues and restaurants, as well as a ban on close-up photos with Disney characters.

Stage performances are kept to two shows, Avengers Training Initiative and Golden Fairytale Fanfare, while parades and nighttime spectaculars will resume at a later date. A girl waits for the reopening of Shanghai Disneyland at the gate on May 11, with social-distancing rules marked on the ground. (Photo by CK Tan)

“Too bad that some of the attractions won’t be available today, but we can return with our annual pass,” said visitor Sam Yu, who was with his girlfriend.

Authorities in Beijing and Shanghai, as well as in provincial-level regions, have in recent weeks lowered their public health emergency responses from the highest to lower levels.

This comes as the government in Beijing copes with the gradual resumption of economic activities and social life, while dealing with the lingering threat of a return of the epidemic. 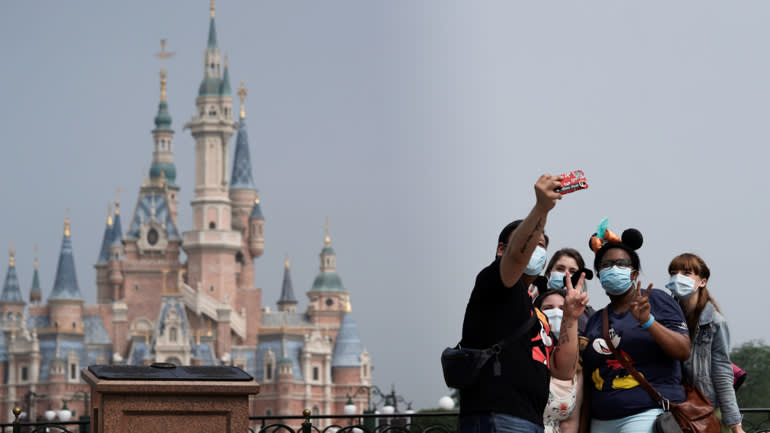 Visitors wearing protective face masks pose for a photo at Shanghai Disneyland on May 11. Trips made by domestic travelers in China fell by 41% to 115 million during the recent five-day Labor Day holiday,

According to government data, trips made by domestic travelers fell by 41% to 115 million during the recent five-day Labor Day holiday, compared with a shorter period last year. Tourist spending declined by 60% to 47.5 billion yuan ($6.7 billion).

A total of 14 new cases in the country were reported on Saturday, 12 of which were domestically transmitted cases mostly in the northeast province of Jilin, prompting authorities there to again raise its emergency responses to the highest level in the county city of Shulan.